As the leading cause of male death in the UK, coronary heart disease (CHD) is often considered a man’s disease. But there’s a stark gender health gap in CHD treatment that’s costing female lives. According to the British Heart Foundation, women are 50% more likely to be misdiagnosed after having a heart attack due to poor knowledge of female symptoms. They’re also dying needlessly or not making as good a recovery as they could because they don’t receive the same care and treatment as men.

Studies show that this snapshot of the health gender gap is true of many other conditions, including brain tumours, chronic pain, mental health, and dementia, while female-specific health issues, including menopause and endometriosis have been historically overlooked by medical research. But there are seeds of change and efforts to redress the imbalance, including a landmark government-led Women’s Health Strategy in England.

What is the gender health gap?

Life expectancy in England has dipped because of coronavirus (Covid-19) but currently stands at 78.7 years for males and 82.7 years for females. So, you’d be forgiven for thinking that women are resolutely healthier.

But according to detailed analysis by the King’s Fund, mortality has fallen faster in males than females since the 70s. And although females live longer than males, most of it (3.3 years) is spent in poor health. And disability-free life expectancy – how long you can expect to live without life-limiting conditions – is lower among females (61.2 years) than males (62.7 years) than females.

A variety of factors lie behind this sizeable gap. But at its core, as highlighted by the disparities of CHD care, is a severe lack of research. So female symptoms go unrecognised, and women don’t receive the right treatments at the right time. For example, research from the University of California, Berkeley, and the University of Chicago shows women are more likely to suffer the adverse side effects of medications because dosages have historically been based on male clinical trials.

Historically, women’s health conditions have also been downplayed. There’s evidence that women are less likely to be taken seriously by medical professionals when they present in emergency care departments. In 2020, the First Do No Harm review, led by Baroness Cumberlege, concluded that UK women were monumentally failed by healthcare professionals who dismissed their safety fears about oral pregnancy tests, epilepsy medicine and mesh implants.

The gender health gap also sits within the context of overarching health inequalities in the UK. Irrespective of gender, people from lower socio-economic groups are more likely to have multiple long-term conditions and lower life expectancy. But women, and particularly women from migrant groups, are more likely to face disadvantage. For example, they’re more likely to be stuck in lower paid jobs and trapped in underemployment, patterns that have been exacerbated by the coronavirus pandemic.

Our white paper Digital opportunities for women’s wellbeing also highlights the ingrained barriers women face when accessing the healthcare system in the UK and the services that can keep them in good health. These include inflexible appointments, low health literacy and demanding family responsibilities.

There are so many layers to the gender health gap, accrued over so many decades, that there’s no easy silver-bulleted way to bridge it. And it’s part of a wider picture of health inequality that needs urgent attention during the UK’s post-pandemic recovery.

But much-needed light is being shone onto the gender health gap, evidenced by the UK government’s new Women’s Health Strategy and wider efforts in Europe to redress gender imbalance. Public awareness is growing, thanks in part to high-profile female voices such as Caroline Criado Perez, author of Invisible Women and BBC Woman’s Hour presenter Emma Barnett, who’s spoken openly about endometriosis and her 20-plus year battle to get answers about her painful periods. And taboo topics are coming out from the shadows. For example, menopause is more widely and candidly talked about – in 2020 it was even added to the secondary school curriculum in England for the first time.

Our white paper also highlights the huge potential of digital tech and not just in terms of shattering barriers to healthcare access with flexible virtual consultations and prescriptions. Crucially, platforms can also heighten awareness of female-specific symptoms and empower women, so they can confidently seek the help and care they need.

Antonia is the Managing Editor at Thrive. She is responsible for overseeing our team of editors and delivering engaging health content.

Download our free white paper on the link below to learn how femtech and other digital platforms can overcome barriers to health access for women: 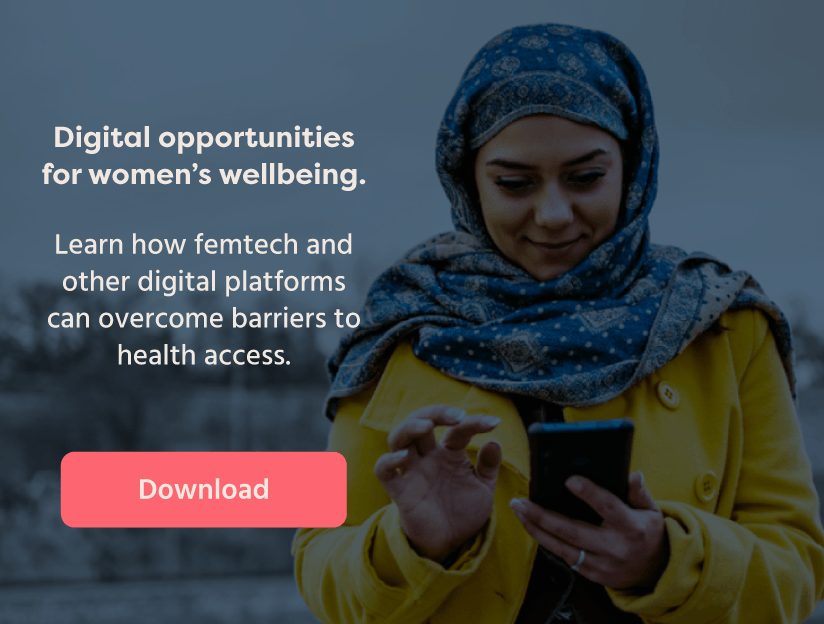